This is a small book, 5x5cm when closed. It is made from one sheet of paper folded and with three cuts to make the pages. Here it is in progress, before it was folded into itself. (The prototype is above it.) 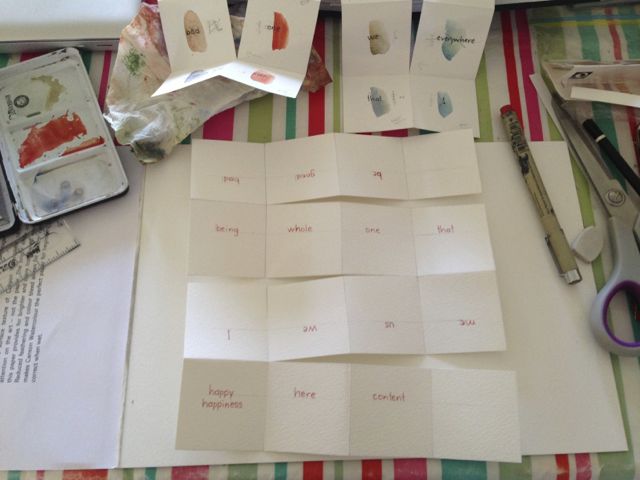 Yesterday’s accordion book made me think of making a double-sided book with both sides interacting together, and the viewer able to change the resulting compositions by closing, opening, or turning pages on either side. I thought of the Surrealists’ game of the “Exquisite Corpse” and children’s books with flaps of various heads, legs, and bodies that could be mixed and matched by flipping through the flaps. Since this little book (well, any artist’s book for that matter) should be handled and explored to be fully experienced, I thought the best way to show it in this context was by making a little film. After seeing the film, Tim thought the experience of going through the book was like a dance between both sides. Tim documented my little stage set up on the dining room table: 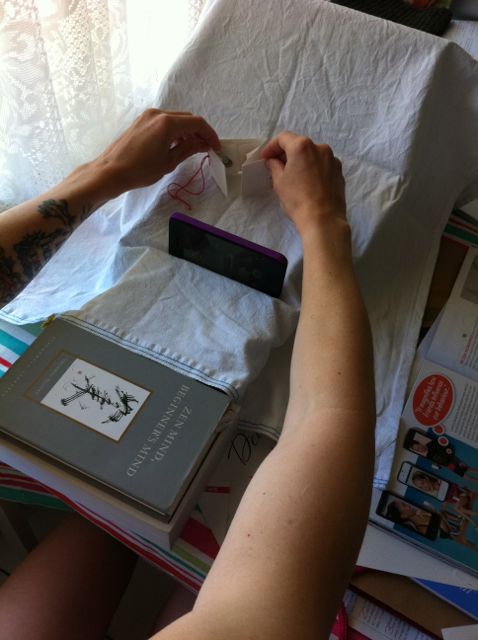 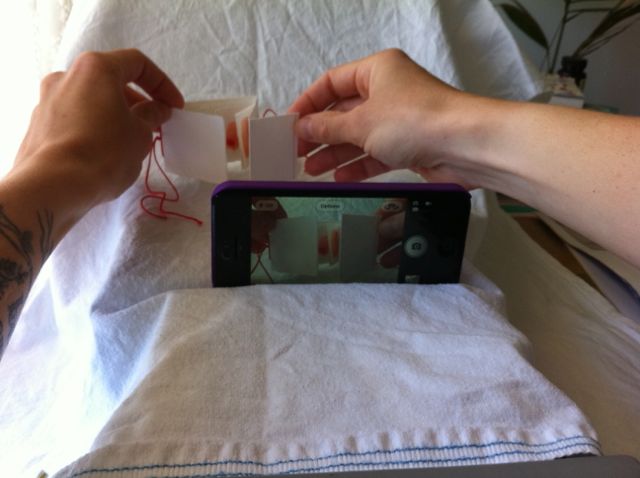 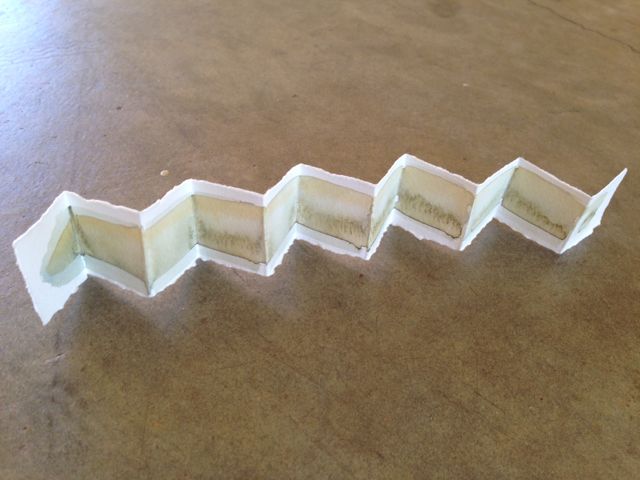 This project just didn’t work. I prepared a new series project and tore all the sheets for it, when I noticed these long strips of paper left over. I immediately thought of making accordion fold books with them. I separated the red ink line drawings on one side, and the watercolor on the other. Unfortunately each side really doesn’t work with the other or on its own. The piece isn’t engaging either if the “pages” are turned one by one. I thought of making a cover for this book and gluing the last two outer pages to it so that only glimpses of the red line could be seen underneath the watercolor side, but there is the wrong number of pages to make this work. One of the watercolor pages would have to be turned under, and the fold wouldn’t work either. This just isn’t a successful piece. 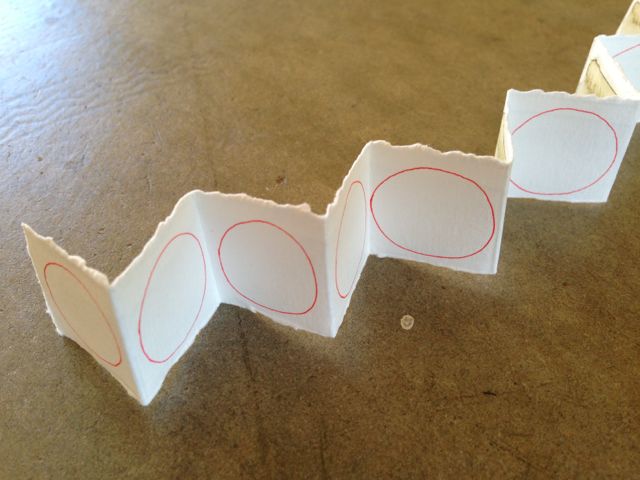 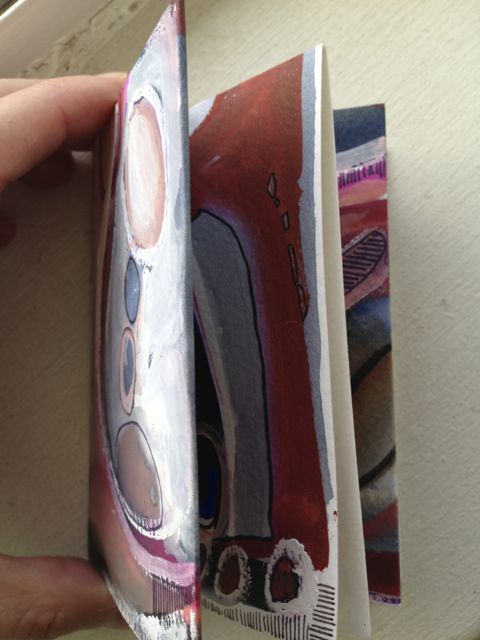 I only brought a small watercolor kit with me to Australia, and I’ve been missing working more thickly with paint. (I miss my oils, but they are packed away in our storage unit in Philly.) So I got a few tubes of gouache paint since it doesn’t require any specific mediums and is very immediate. It’s been a long long time since I used gouache, so on Saturday I played around with a few colors to see how the paint behaves. Exciting stuff. I can use it almost as transparently as watercolor, build up quasi opaque layers, use it thickly (but not too much or it risks cracking), subsequent layers of paint can “pick up” color below (this can be a disadvantage too), and colors can run and bleed similarly to watercolor. Since I was just tooling around on a piece of paper, I wasn’t expecting to make anything in particular, and the color reflected this; it was pretty awful! On Sunday, I decided I’d try to make something of it though. Using the paint’s opaque qualities to work additively I covered up and unified some the marks. I folded and cut it into a book — why not? — and then worked on each page, sometimes moving back and forth between pages. I finished with some ink drawing as well. While the palette is a little odd for me, I think the final piece is kind of interesting, even if just as an experiment! Here it is, page by page: 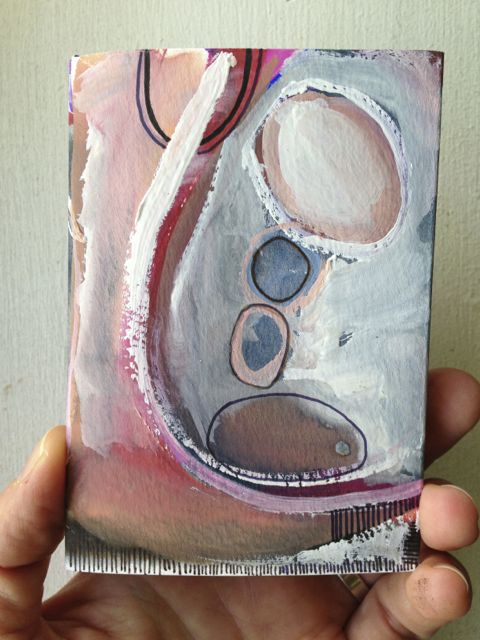 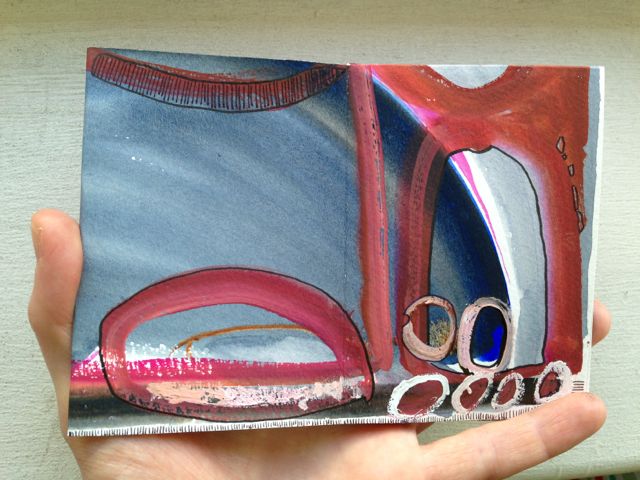 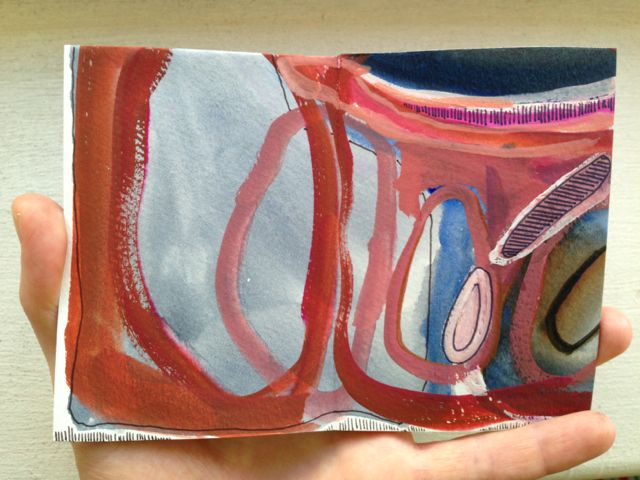 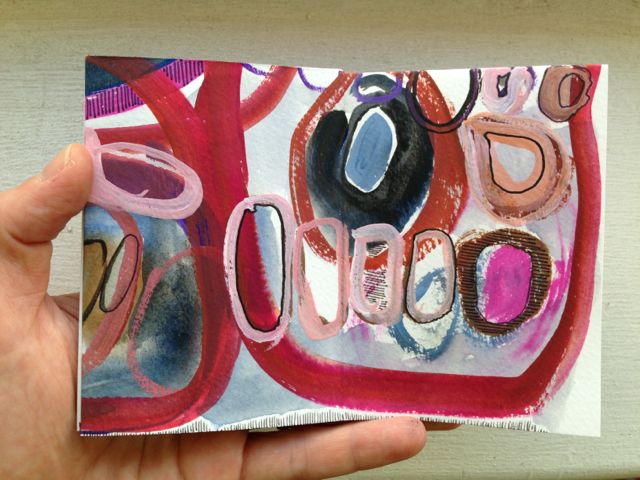 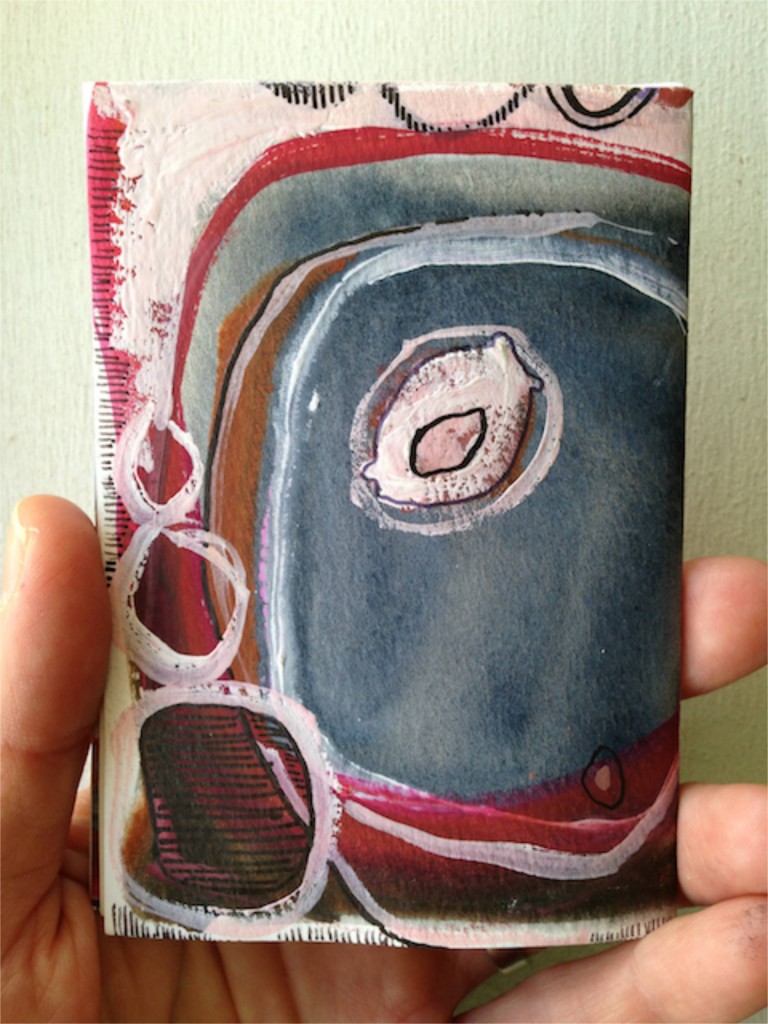 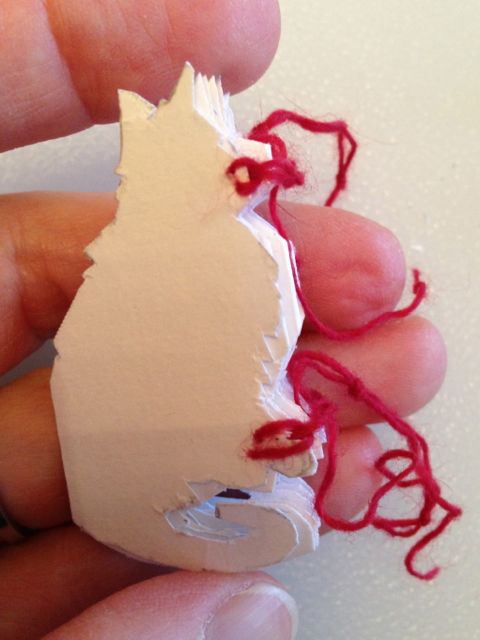 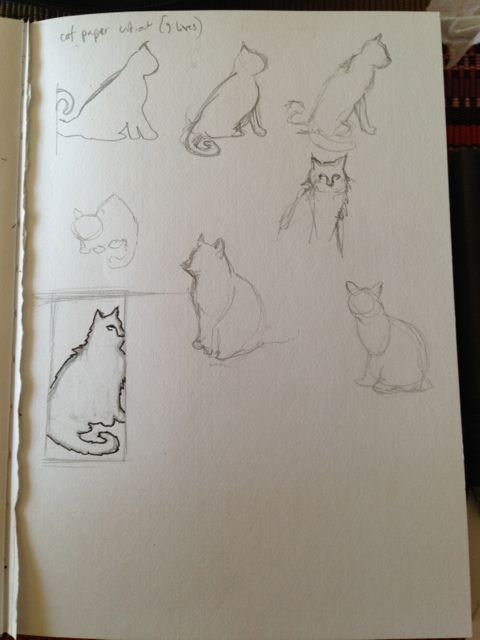 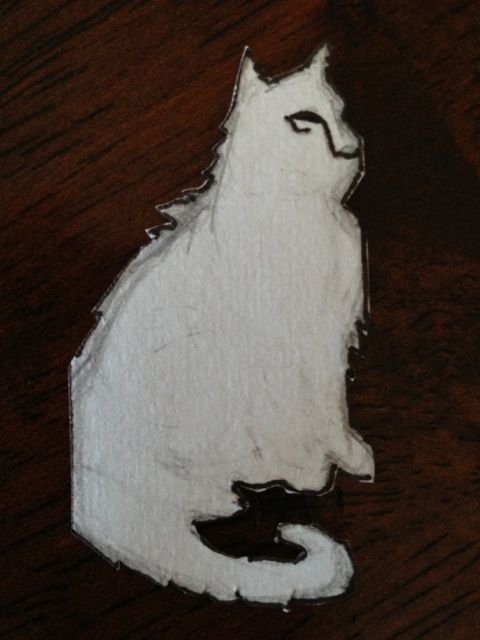 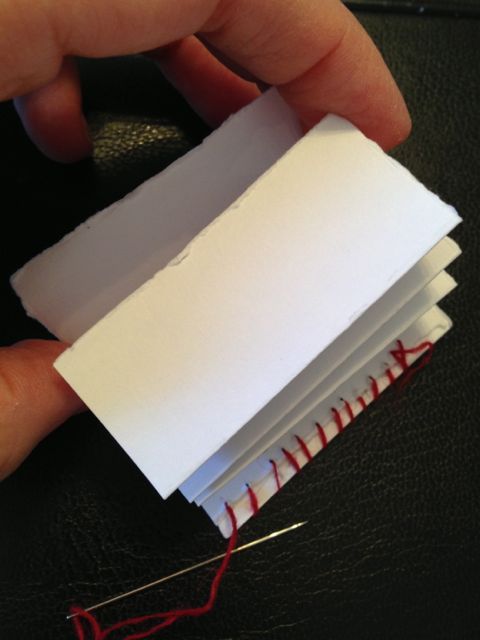 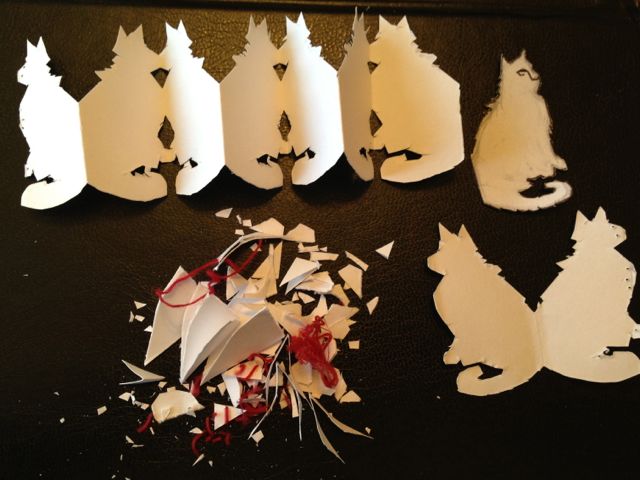 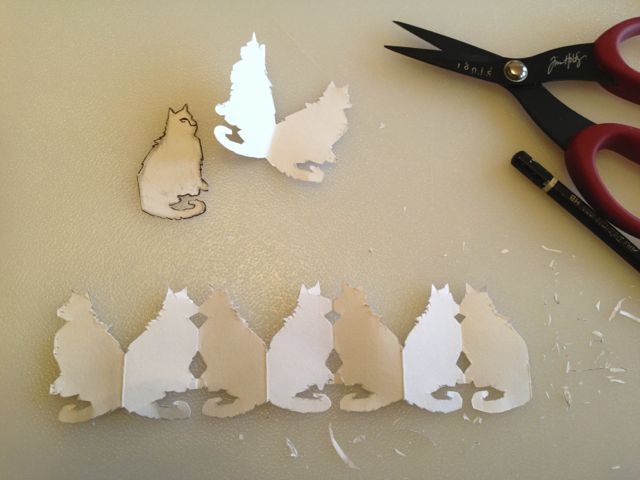 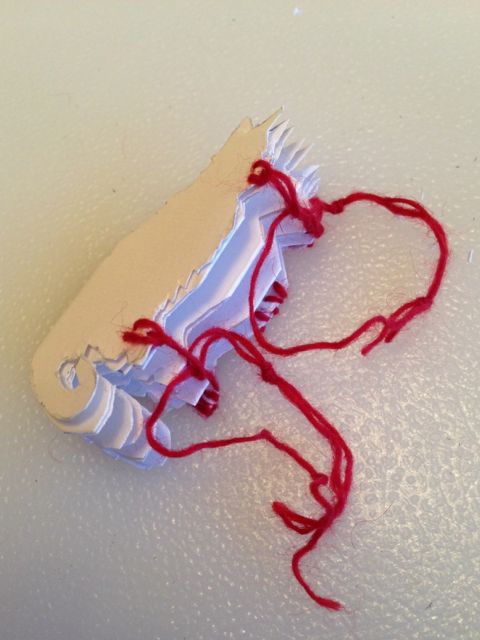 I am beginning a year-long goal of making a project a day. It’s been way too long since I made work on a regular basis, and I really miss it. Since the birth of our son 12 weeks ago, it seems that time is moving in fast-forward, and I have this sense of urgency — that I don’t want to lose or waste time anymore.

So starting today, I’ll be making a project per day, something small that can fit in my hand.

Today, I made a little book from one sheet of paper, with no sewing or gluing. 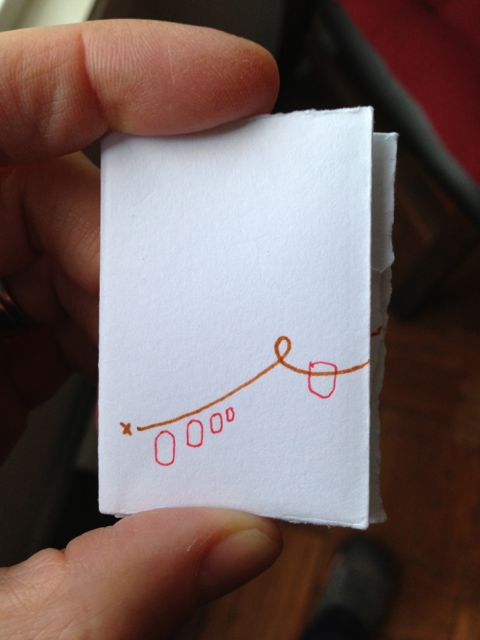 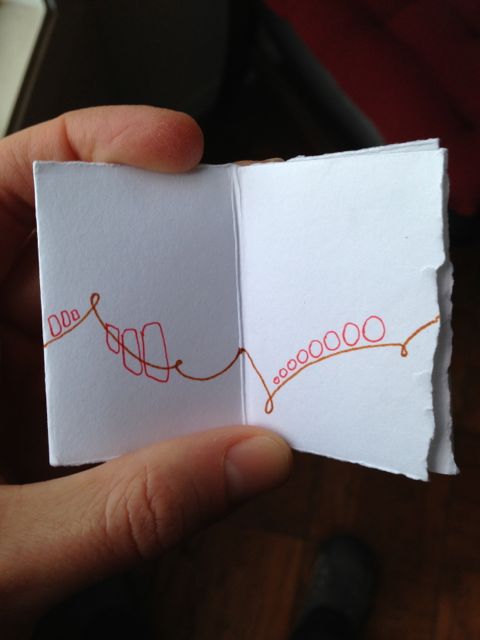 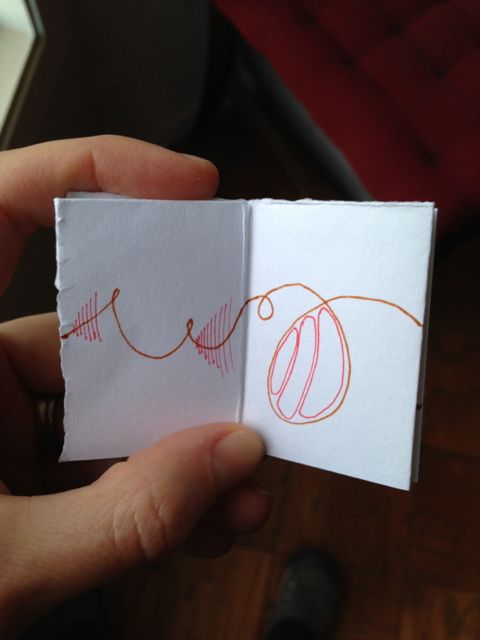 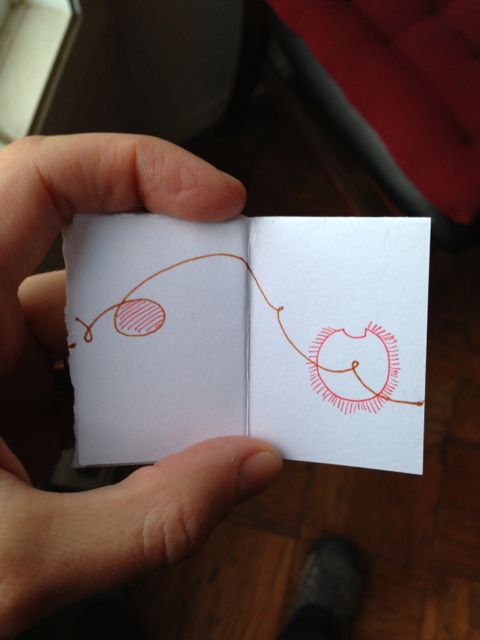 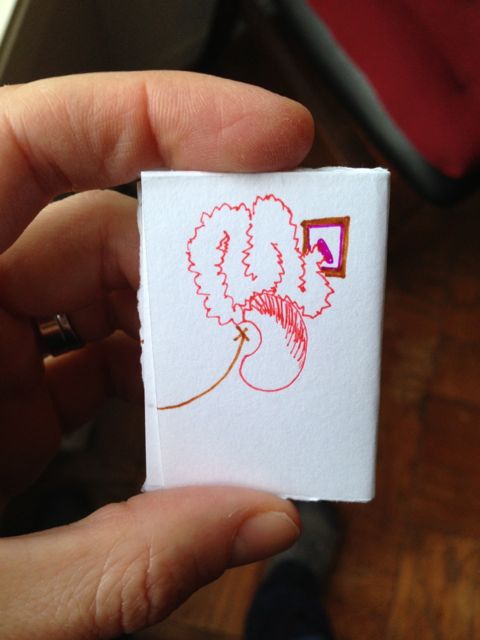