All US orders ship for FREE with code IGOTTHIS Dismiss

For the last year, I worked on the largest (literally and figuratively) project of my art life, Paper Mountain. The idea of creating this immersive experience for people – something much larger than any of us, that would evoke a mountain – was a driving force in my life. I consider it a major success and I’m really proud of that project. You can see images of this installation and read more about it here.
My other big motivator are my husband and son. It is super important to me to be the best version of myself so that I can be a good partner and parent – and continuing to make artwork is one of the best ways that I can follow my path and be true to who I am and what I am supposed to be doing. Having my son was hands down the biggest catalyst for reframing the way I perceived myself as an artist, and as soon as he was part of my life, I wanted to demonstrate strong work ethic and I wanted him to be proud of me and of my work. I do that by continuing to make art work. Read more about how being a parent has positively impacted my art practice on this blog post.

I finished installing Paper Mountain at Elder Gallery of Contemporary Art last week. After one year of planning, three months of folding paper cranes, and one week of installation with a team, it feels good to see the project come to life and to share it with others.

Beyond the Mountain is up at Elder Gallery of Contemporary Art until April 26, 2019. If you haven’t already, go see it! You’ll experience Paper Mountain, Sky Project, and paintings by me and Martha Armstrong.

On November 14th, 2018, I started folding 1200 birds for Paper Mountain. Well I actually started earlier, but all the birds I folded before then didn’t make the cut. I was testing out papers, and didn’t find the right combination of size and weight until the middle of November. So from mid November until February 12th, I folded birds every single day without fail (except for 3 days spent painting at a workshop). In this video, I am folding the last of the 1200 birds. As soon as I folded that last bird, I felt a tinge of nostalgia. I really enjoyed my daily folding (typically 1-2 hours per day).

From March 9-14, I’ll be installing Paper Mountain and Sky Project at Elder Gallery of Contemporary Art in Charlotte, NC. The exhibit opens on March 15th. I’m still raising money to make this project happen, and I’d love it if you would contribute and be a part of this big undertaking. Thanks to everyone who has already contributed to the project!

Please forward and share this with all your friends!

Note: The video is sped up 2x and it’s set to Ella Fitzgerald’s “A-Tisket, A-Tasket.”

My idea started simply: Build a mountain of paper.
As a painter, my work is basically two-dimensional. As a painter concerned with the outdoor experience, the flat surface of a painting could be considered limited. A bit like looking through a window instead of being outside in a landscape. I wanted to make an immersive experience, something bigger than me or anyone else. Something evocative of the outdoors, specifically being in the presence of a mountain. I often think of the sculptor Richard Serra’s work, gently curved huge steel walls. Standing near these sculptures, one gets a strong  feeling of being in the presence of something much larger than we are as humans, something that looms over us in a physical sense and evokes standing near a mountain or in a crevasse – something approaching the sublime.
So I planned to build a mountain using paper because paper is the most basic element we use as artists. I hoped that it’s delicate feel would help convey the fragility of our environment and that it would contrast with the large scale of the mountain.
I first thought I would stack recycled paper in 1-ton bales and retain the mountain shape using wire – the same kind of wire used on rock faces on the side of roads to prevent rock falls. It turns out recycled paper smells terrible, so I ruled that out. I thought about using recycled plastic, but decided it would end up looking like piles of trash and would be too oppressive in a gallery setting.
I then thought of making a mountain form with wire and lumber covered with paper. When I went to Elder Gallery to take photos and measurements, I noticed that there were metal beams along the ceiling. Rather than building my mountain on the ground, I could hang it from the ceiling! The mountain could be suspended. I could make wire and folded paper sandwiches so that each piece holds its shape, and they would all be hung from the ceiling like a sort of dense mobile.
To try this out, I built a smaller version of the mountain in my studio. I attached chicken wire to grey paper and molded each piece into what looked like a large rock. I hung all the pieces from the ceiling. It looked terrible. It looked like exactly what it was: paper with chicken wire taped to it. I want my mountain to be transcendent, to be more than the sum of its parts. I want my mountain to inspire, to make people dream, to be poetic. This was not it. Back to the drawing board.
When I had originally conceived of the project, I thought about using paper folding techniques so the piece would be elegant in its finished form. I wondered if there were mathematical concepts that could generate folds to look like rock formations. I decided I wanted my piece to feel more organic though, and initially decided against paper folding. After mocking up the mountain using the paper and wire sandwich though, I reconsidered the paper folding. I remembered all the time I’d spent folding paper as a child.
Paper folding is something that I’ve always returned to even as an adult – it’s meditative and it’s like magic – making three dimensional objects with a sequence of folds. I remembered the story of the 1000 cranes, that folding 1000 cranes would bring you luck. There are other stories of the 1000 cranes involving kindness and peace and giving. I decided I’d try to hang the cranes in a mountain formation that would touch the ground. The mountain would be made of a dense flock of birds. The companion project to the Paper Mountain is a project involving images of skies, so birds were fitting.
I went to work finding the right paper. It had to be big because the area of the mountain would be thirty feet long, ten feet wide, and thirteen feet at its highest point. The paper had to be the right weight. Too light and it would collapse under its own weight. Two heavy, and it wouldn’t fold correctly. After weeks of folding cranes using all weights and sizes of paper, I found a drawing paper that worked well enough. Each sheet must be cut to an 18×18 inch square. The paper is thick enough that as folds are added and its structure gets more rigid, it fights back a little. But I found ways to effectively fold it so the folds are crisp. And with its weight, it holds a good shape.
Over the course of a few days, I hung each bird using fishing line from my studio ceiling, in the dense flock I’d imagined in my mind’s eye. I started at the top and realized that I should rather start from the bottom to avoid getting birds tangled in fishing line. I started too densely and then left more space in between them. When the small mountain was finished, it felt right. I calculated that I would need to fold 1200 birds to make the mountain as large as I planned. If there’s one thing I’m good at, it’s taking large projects and breaking them down into smaller chunks. So every day, without fail, I’m folding birds.

To learn more about Paper Mountain, visit the project page.

I’ve been folding paper since I was a child. It has always been a mindful activity that brings me peace. Today is world kindness day, so I want to share peace and kindness with you as I fold this crane.

My heart breaks each time I hear the news these days, and as an artist, we sometimes question the validity of what we do in times of crisis. But after years of thinking about this, I know that what artists do is essential to humankind. We open up conversations and connections between people who may never meet. And today in a small quiet way, I am sending peace, love, and kindness to the world. Paper folding is a prayer for peace. 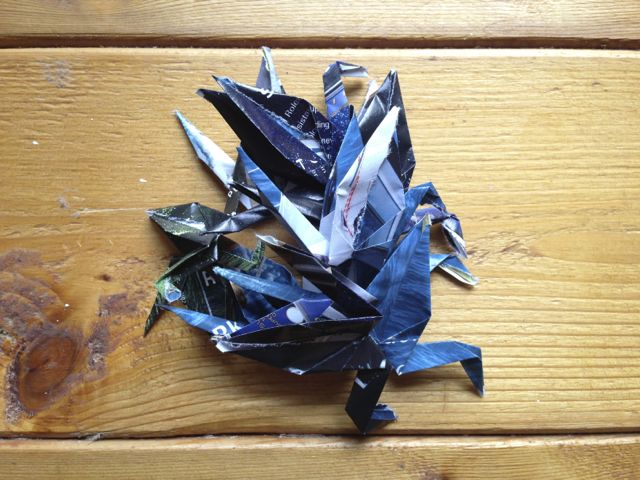 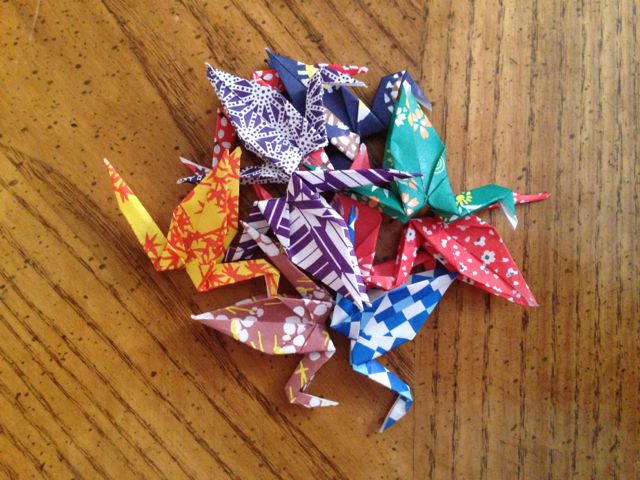 10 more tiny cranes to add to the collection. The current tally is 201. 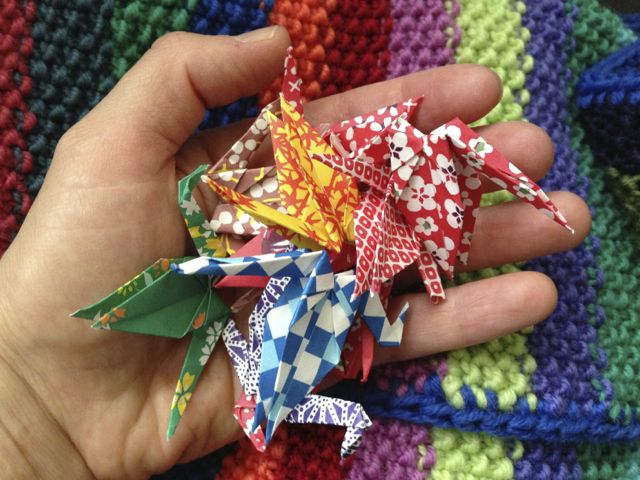 I found some tiny sheets of very pretty paper today. Happiness! So here are 10 more cranes to add to the bunch. 191 total now 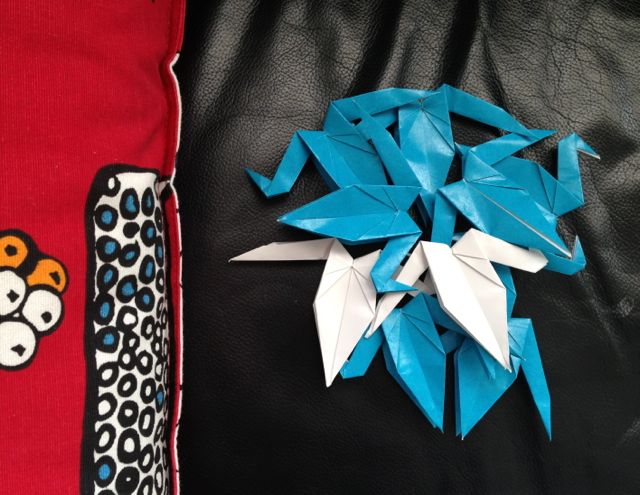 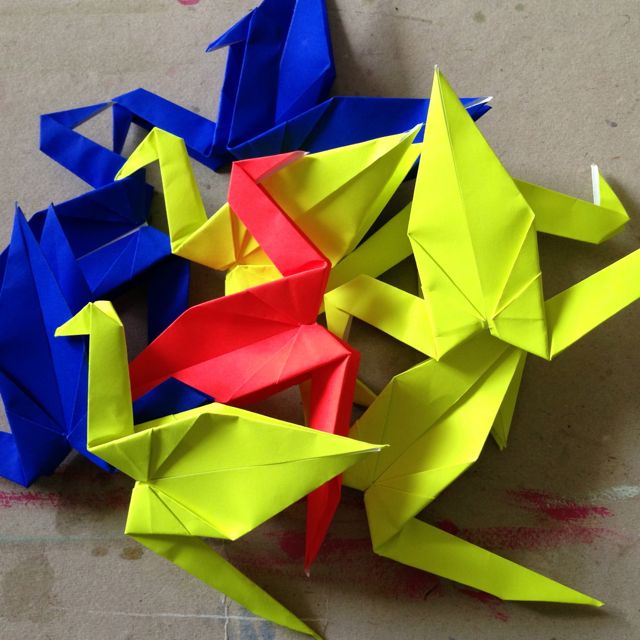 It was nice to shut off my brain and just repeat the same motions over and over to make my 10 cranes today. The tally is 171.

Want your art collection to feel like the wind rushing through your hair?